Early Guesses about the Secret Warriors


One of the key focuses for Agents of S.H.I.E.L.D. season 3 will be on Skye Daisy (apparently the writers’ room has a “Skye Jar” for them to put a dollar in whenever they call her “Skye” instead of “Daisy”) forming a team of “Secret Warriors.”  If you remember from the season 2 finale, Coulson gave Daisy a folder labeled “Caterpillar” in homage to the “Caterpillar Program” in the comics.  This was a program by which Nick Fury recruited the super-powered children of super-villains to form a super team because he believed the “official” super teams (the Avengers, X-Men, Fantastic Four, S.H.I.E.L.D.) to have been infiltrated by the Skrulls.  Because these children of powered people were relatively under-the-radar at the time of recruitment (so-called “caterpillars”), Fury hoped that none of these budding heroes would have been replaced with body doubles yet.

Obviously, that’s not what is happening here.  Rather than forming a team to take on the Skrull Invasion, Coulson is instead forming an enhanced team to take on major threats which regular S.H.I.E.L.D. agents are not capable of fighting.  As of now, the primary “threat” they face is from the Inhumans, though that could easily change.  Ward is in the process of rebuilding Hydra, which we already know to have employed brainwashed enhanceds in the past (c.f. Donnie Gill, the Twins, and whoever it was that attacked the S.H.I.E.L.D. Academy); could Ward manage to get his hands on a few enhanced people to use against S.H.I.E.L.D.?  That seems entirely possible, especially with Inhumans starting to transform all over the place thanks to the Terrigen Fish Oil.  And speaking of Terrigen Fish Oil, that will probably be the biggest “threat” and opportunity for S.H.I.E.L.D. and the Secret Warriors in season 3:  there will be new Inhumans all over the place who will emerge from the chrysalis scared, with new powers that they can’t understand or control.  Some of these will use their powers for evil, while others will just need a hug.  It will be a race for S.H.I.E.L.D.—along with the Advanced Threat Containment Unit, Hydra, other Inhuman groups, and who knows how many others—to find these new Inhumans, contain their powers, keep them out of the wrong hands, teach them control, and help them adjust to the transformation.  I expect the Secret Warriors to be a major part of that work in season 3.

But before going further into my thoughts on the Secret Warriors’ missions in season 3, I thought I would give my thoughts on how the team will be put together and introduced to the series.

As of now, we know that a significant period of time will have elapsed between the season 2 finale and season 3 premiere.  This will at least be enough time for everyone (except Fitz) to have accepted Simmons’ disappearance.  However, we do not know what this time lapse will mean for the Secret Warriors.

My guess is that there will already be a small “Secret Warriors” team in operation at the beginning of the season—perhaps the “team” we’ve seen in action in the set photos.  However, this will not be the final roster for the team and will primarily consist of characters we’ve already met.  The team we’ve seen in the set photos consists of Skye Daisy, Hunter, and Mack, but I wouldn’t call them the “Secret Warriors” since only one has powers.  If I had to guess, the “founding members” of the Secret Warriors will be Daisy, Lincoln, Deathlok, and perhaps Alisha (the multiplying Inhuman).  They may add a new character to the team, but I doubt they will introduce multiple new Secret Warriors right off the bat.

I think that following their first appearance, the Secret Warriors roster will start to expand relatively quickly as new members are added.  My guess is that the first few new members will be established heroes from the Index whom Coulson and Daisy recruit for the team.  As the team begins going on missions relating to the new Inhumans, however, some of these new Inhumans will be recruited to join the Secret Warriors.  Eventually the team will start to have a more filled-out roster.  However, I don’t think the full roster will be clear until the midseason finale at the earliest.

Once they have a decent number of Secret Warriors to call on, I’m looking for the team to adopt something of a rotating roster where members come and go according to the needs of the mission.  In fact, Daisy may be the only team member who stays constant for every mission, with Lincoln only being called in to deal with new Inhumans and Deathlok only being called in for backup when they face extreme threats.

I actually hope that they will use a rotating roster similar to the Avengers in the comics because it would give us a chance to see these characters interacting with each other in a lot of different configurations and different scenarios.  That is one major benefit I can see to having a superhero team on a TV series:  the roster can change regularly, giving a lot of different heroes an opportunity to shine.

The Secret Warriors’ storyline in season 3 will probably be twofold.  In the first place, they will be tasked with handling any new Inhumans that come to S.H.I.E.L.D.’s attention.  My guess is that Lincoln will be primarily responsible for helping them to transition and helping them to understand the Inhuman story.  The new Inhumans will most likely fall into four categories:  dangerous threats whom S.H.I.E.L.D. will imprison, assets who will join the Secret Warriors, people who just want to be left alone and who will be allowed to return to their regular lives, and those with more physical transformations for whom S.H.I.E.L.D. (meaning Daisy) will form a more permanent settlement along the lines of Lai Shi.

I expect this to be a focus early on in the season, but that over time they will shift away from focusing as much on the Inhumans.  Eventually, most new Inhumans will get a passing mention unless they become villains or join the team.

This change in focus will most likely bring Hydra to the forefront.  With Ward finishing off season 2 by declaring that “I want a team,” Hydra is going to be coming back with a vengeance.  And with new Inhumans popping up all over the place, I think the odds are pretty good that Ward will manage to get his hands on at least a couple of them to start building his own super-powered team to go after S.H.I.E.L.D. and the Secret Warriors.  This Hydra-vs.-Secret-Warriors plot may even provide the series with its tie-in to Captain America: Civil War in the spring.

In the comics, the Superhuman Civil War is triggered by a sharp divide between Iron Man and Captain America over the idea of superheroes being required to reveal their secret identities and register with the government—the so-called Superhuman Registration Act.  However, this Act did not appear in a vacuum; it was proposed in response to a massive disaster in Stamford, Connecticut, when a team of inexperienced young heroes (the New Warriors) attempted to take out a team of major villains, all to increase the ratings for their reality show.  One of the supervillains, Nitro, used his powers to detonate a massive explosion, killing over 600 civilians, including 60 school children, along with almost all of the New Warriors.  The ensuing backlash led to the U.S. Government’s decision to pass the Act.

The MCU version of the Civil War is obviously not going to follow this series of events exactly, but it is entirely possible that the Stamford Incident will play out in some form.  As of now the most likely trigger for the “Accords” (MCU version of the Superhuman Registration Act) is Ultron’s attack on Sokovia, but there could be something else which happens closer to the actual start of the Civil War.  This incident may happen during the movie, but it could just as easily be tied to a major battle between Ward’s Hydra team and Daisy’s Secret Warriors.  This battle could result in either heavy civilian casualties or the deaths of children or something like that, leading to the U.S. Government’s decision to sign on to the U.N.’s Accords.  This would be a nice way to tie everything together and show how the Civil War is affecting all corners of the MCU.

It’s much too early to know anything about Marvel’s future plans for the Secret Warriors, but anyone who’s been reading my blog for a while know that that’s never stopped me from speculating!

I think my ideal future for the Secret Warriors would see them become a small-screen version of the Avengers with a flexible, rotating roster.  Specifically, in my ideal future they get spun off into their own series either next year or the year after.  Unlike the Avengers, the Secret Warriors would face non-Earth-ending threats on a regular basis, though they would occasionally team up with other super teams to confront major threats like Ultron and Thanos (think Avengers: Earth’s Mightiest Heroes).

I think a regular network TV series about a superhero team would be a very good addition to the MCU.  The movies—and the Avengers—are awesome, but you really miss a lot of the day-to-day interactions and missions which fill much of the comics when you only see the team together for a couple hours every few years and then only to confront a major threat.  A Secret Warriors TV series could put them up against a major threat each season, but many of the episodes would be about a few of the team members taking on a minor threat in a plot which builds toward the final major confrontation.  This format would allow the series to feature cameos by a lot of different heroes, both Secret Warriors and others, without necessarily overloading the series with a ton of characters in every episode.

Of course, that’s all assuming that the Secret Warriors survive season 3… 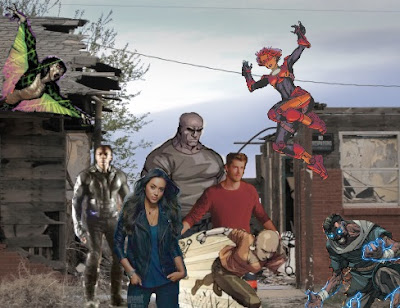 These are some of my thoughts about the Secret Warriors plot for Agents of S.H.I.E.L.D. season 3.  I am very curious to see what the team roster will eventually look like and if any of my suggested members will actually be part of it.  Hopefully AoS will not disappoint us with its first bona fide superhero team!
What do you think the Secret Warriors team will be doing this season?  Who do you want to see on it?  Do you think there will be a connection between the Secret Warriors and Captain America: Civil War?  Let me know in the comments!