Another week, and more MCU news!  A Jessica Jones release date, S.H.I.E.L.D. promotions, and some more news about upcoming movies.  Put some ketchup on your eggs, and catch-up (*ducks*) on your Marvel news!

Yet again, all my articles this week are reviews.  First up was Agent Carter season 1, episode 6 “A Sin to Err.”  What did you think of Peggy’s bad day?

For Agents of S.H.I.E.L.D. I finished up the half-season with season 2, episode 9 “Ye Who Enter Here,” and episode 10 “What They Become.”  What was your favorite moment from the first half of season 2?

Did you spot this Buffy the Vampire Slayer Easter Egg in Avengers: Age of Ultron?

According to Elizabeth Olsen, Baron Zemo will be the main villain in Civil War.  I’m not overly surprised.  My guess is that he will play more of the Kingpin/Killian/Hammer role of manipulating events from behind the scenes while Crossbones provides the muscle.

James Gunn opened up a bit about Guardians of the Galaxy Vol. 2, among other things clarifying that there will only be 1 new Guardian in the sequel and that he reduced the number of characters from the original plan in order to focus more on fleshing out the characters.  In other words, the sequel is going to try going smaller and more personal, rather than bigger and flashier.  What do you think of this information?

James Gunn evidently can't use these guys for an unusual reason.  Huh.  Do you think Marvel did that intentionally?

Turns out that Thor: Ragnarok will not be filming in Australia, but will instead return to Atlanta.  Only one problem:  there still isn’t a director.  Is that going to come by the end of the month?

Could the Masters of Evil be on the way?

Is this our first look at the Secret Warriors on Agents of S.H.I.E.L.D.? 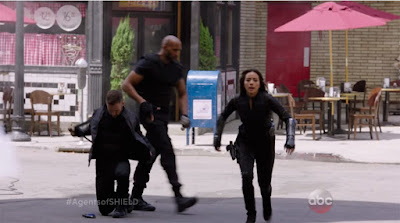 We see Hunter, Mack, and Daisy, with the latter wearing a new version of the gauntlets which look like they were pulled straight from the comics.  What do you think?

Jed Whedon and Maurissa Tancharoen spoke to Entertainment Weekly about Lash and what to expect out of the Inhumans this season.  Among other things, Lash will be even more of a monster than he is in the comics.  They are also changing his character a bit to keep us on our toes.  My guess is that the broad strokes of his character will remain the same, but some of the details will be different.  What do you think of this news?

Krysten Ritter offered a few teases for Jessica Jones season 1.  Among others, a romance with Luke Cage and a few teases for the Purple Man, including that they will make a few changes to his character (which is pretty much par for the course with comic-to-live-action adaptations).  Still no news of when it’s coming out, though…

And just like that, they announced the premiere date for Jessica Jones:  November 20!
I have to say, I really like this trailer/announcement.  It sets the tone extremely well and places it squarely within the same universe as Daredevil while still highlighting the differences.  There really isn’t that much more to say about this trailer, though you’ll notice that the Alias Investigations window sign flashing past looks like a comic book cover and that the color purple is featured prominently.  I expect that over the next two months we will get another trailer or two as well as character posters for Jessica, Luke, Patsy/Trish Walker, Zebediah Kilgrave, Claire, and maybe another main character—probably in the same vein as the Daredevil character posters but with some twists.  For example, if the poster shows Jessica hovering in midair, that would definitely set this series apart from Daredevil.  What do you think of this teaser and announcement?

Luke Cage has another comic book character cast:  Detective Scarfe.  In the comics he is an associate of Misty Knight and serves as the police contact for the Heroes for Hire, so we may see him either in that role or moving toward that role.  How do you think Detective Scarfe will fit in?

Marvel TV will be at NYCC in force this October, with panels for the animated series, ABC series, and Netflix series.  What do you want to see there?  Which panel are you most excited for?

Are you going to buy the Guidebook to the Marvel Cinematic Universe when they start coming out in October?  I’m probably going to, so I’ll probably put quick reviews up when they come out.

Marvel Comics announced a new Red Wolf comic book series.  Considering that Red Wolf is Marvel’s first American Indian superhero, I’m pretty interested, and I’d also like to see him appear in the MCU some time down the line.  Do you want to see a live-action version of him, and if so when/how?

Marvel will also have a Patsy Walker/Hellcat series, just in time for the character to make her cinematic debut in Jessica Jones.  Similar question to above:  do you want to see her get her own Netflix series next?

New Wonder Woman rumors:  The first half of the movie will be set during World War I, followed by a time-jump to the present.

Oh, and Wonder Woman will begin filming in November.  Which are you more excited for:  Wonder Woman or Captain Marvel?  Deborah Snyder also makes the comment that they “tried to hire as many female people on the crew as possible.”  Huh.  Why would they hire someone based on their lack of a Y-Chromosome rather than their abilities?  I get that there was a time when women were not offered these kinds of opportunities, but discrimination in hiring seems counterproductive when you’re trying to combat discrimination in hiring.

Sean Bean and Eva Green are both rumored to be appearing as villains (Ares and Circe, respectively) in the Wonder Woman movie.  Anyone else see bad things in store for the God of War in this movie?

Preacher will debut in May 2016.  Are you excited?

Children of the ‘80s and ‘90s, unite!  Do you remember the Animorphs books?  I do; I read the first 20 or so and then lost interest.  Well, apparently they are reportedly working on a live-action movie based on the franchise, with the potential to spawn its own movie franchise.  Are you interested in seeing some more ‘90s nostalgia on the big-screen?