Another week, and more MCU news!  There isn’t a ton this week, but there are several rumors out about Thor: Ragnarok, Inhumans, and Marvel Netflix.  Oh, and FOX announced a couple X-Men TV series.  Put some ketchup on your eggs, and catch-up (*ducks*) on your Marvel news!

Here is a quick article with my guesses for the recently-announced 2020 Marvel movies.  What do you think they will be?

With everything going on in the realm of Marvel TV, I decided to write a quick rundown of all the series, including those in development.  Which are you most excited for?

The third article in my “All-New, All-Different Marvel and the MCU” series:  MCU teams.  Which of these characters or team concepts do you want to see in the MCU?

So… why does Simmons have to go back to the planet?

So there’s a new rumor floating around that Rachel McAdams’ character in Doctor Strange is a Night Nurse, but not the Linda Carter iteration.  Rather, the rumor suggests that she is playing Christine Palmer, a Night Nurse who comes from more of a surgical background.  What do you think of this rumor?  Would you rather see her as Clea?

The Hulk/Banner is rumored to be appearing in Thor: Ragnarok, and may have a significant role.  Any guesses?

Now there are even more details coming out about Thor: Ragnarok.  In addition to the Hulk, Valkyrie may make her MCU debut, which is exciting as she is not only a badass female hero but one of the best swordsmen in the Marvel Universe.
It is also reported that the original script was too dark, and that’s why Marvel may be hiring Taika Waititi (a director with a comedic background) to direct and tweak the script.  Which of these rumors do you find most interesting?

Now that F. Gary Gray is out of the running to direct Black Panther (I guess Fast and Furious 8 sounds cooler), Ryan Coogler (director of Creed) is the rumored frontrunner for Black Panther.

Remember that rumor I mentioned last week about The Inhumans being canceled?  There’s another rumor now that the previous rumor was incorrect.  To be honest, I figured it was just BS.  Are you excited for The Inhumans?

On the subject of The Inhumans, Vin Diesel is yet again teasing that Marvel may have him in mind to play Black Bolt.  Specifically, he said that “We’ve heard a lot of talk about Marvel wanting to have me play a character that doesn’t have my voice. So my voice is used for Groot and my presence is used for the other character.”  The one question I have with that is the “character that doesn’t have my voice,” as Black Bolt does have a voice, but he doesn’t speak at all except when he’s making things go “boom.”  Do you want to see Vin Diesel play Black Bolt?

Powers Boothe has been cast as Gideon Malick in a recurring role on Agents of S.H.I.E.L.D.  According to Screen Crush, this is the same character that Boothe previously played in The Avengers, creating yet another big-screen/small-screen connection in season 3 (following the same president from Iron Man 3 appearing in the pilot).  It sounds like Malick will be another antagonist, and possibly connected with Hydra.  How do you think he will factor in?

Carrie Anne Moss has been announced to be playing Jeryn Hogarth, and attorney who is the business manager for the Heroes for Hire in the comics.  This is a gender swap from the comics.  What do you think of this announcement?

Daredevil villain Nuke may be coming to Jessica Jones, at least based on Wil Traval’s description of his character.  Does that mean he will still be a psychotic super-soldier with a flag tattooed on his face?

The first episode of Jessica Jones season 1 premiered at NYCC, and so far it has gotten glowing reviews.  Excited?

If you’re not excited for Jessica Jones yet, go to Comixology and download the newly-released tie-in comic.  It’s nothing huge, but showcases the fact that JJ and DD are both in the same area and dealing with the same criminals.

Luke Cage’s catchphrase, “Sweet Christmas,” will be appearing in both series (Jessica Jones and Luke Cage).

Here is a description of the Daredevil season 2 footage shown at NYCC.  And here it is!  What do you think?

According to Mike Colter, Luke Cage will take place a few months after Jessica Jones and in Harlem.  What do you think he’s running from?  I have a theory…

Do you think Coulson will drop by Hell’s Kitchen at some point?  I definitely wouldn’t be surprised by it. 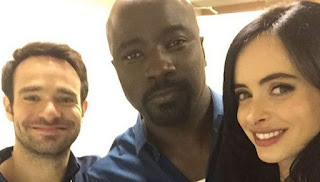 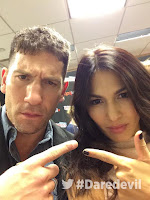 Which series are you most looking forward to?

Rumor Has It that Marvel is planning a Moon Knight Netflix series, with the character first appearing in another character’s series.  I’ll have an article on this later today, but what do you think of it for now?

Breaking News:  FOX and Marvel came to an agreement which will see FOX produce 2 X-Men TV series, one for FOX (Hellfire), and one for FX (Legion).  IT’S THE APOCALYPSE!!!1!  *ahem* No word yet on the details of the agreement, though Jeph Loeb and Jim Chory from Marvel Television are credited as executive producers for both series.  I’m hoping that Marvel got back the rights to at least some of the cosmic characters included in the FF.  And according to Den of Geek, that is exactly what happened:  Marvel is getting back the Fantastic Four, as well as Galactus, Silver Surfer, and Dr. Doom!... and the rumor is debunked.  What do you think the agreement is?  Are you going to watch either of these series?

They are still being kind of up-in-the-air as to whether or not Supergirl is in the DCTVU with Arrow, The Flash, and Legends of Tomorrow.  They want to establish that show on its own merits before talking crossover.

Apparently the practical sets and effects used on Rogue One: A Star Wars Story meet Alan Tudyk’s approval.  I definitely like how the new Star Wars movies are going practical as much as possible.

So he didn’t go into the exact numbers, but apparently Joss Whedon actually made more money off Dr. Horrible’s Sing-Along Blog than The Avengers.  Ouch.  Of course, he did fund the whole thing himself, meaning that pretty much any profit goes to him, so…

Speaking of Joss Whedon hits with cult followings, the Firefly cast would be game for a second season.  Would you want to see Firefly season 2?

Steven Spielberg is considering an Indiana Jones 5 with Harrison Ford.  If they can do some time-travel hijinx to make Indiana Jones and the Kingdom of the Crystal Skull not exist, I’d be interested.

In answer to everyone’s burning Jurassic World question, wearing heels was a character choice by Bryce Dallas Howard:  She felt that made sense for Claire.  Does this appease you?