Another week, and more MCU news!  The hype train for Jessica Jones has definitely picked up steam!  Put some ketchup on your eggs, and catch-up (*ducks*) on your Marvel news!

First up, there was a rumor going around last week that Marvel Netflix could introduce Moon Knight in a different series before spinning him off for his own.  Here is my breakdown of how he could factor into all the upcoming series.  Are you interested in seeing psycho-Batman on Netflix?  I sure am!

Up next, my Agents of S.H.I.E.L.D. season 3, episode 4, “Devils You Know” expectations and review.  What did you think of the episode?

Also on Tuesday I published my 200th episode, on “National Heroes and the MCU.”  Which are your favorite “official heroes”?

Continuing the “All-New, All-Different Marvel and the MCU” series, here are all the minor MCU characters who could be destined for bigger things, along with a few I’ve talked about in the past.  Additionally, here is my idea for expanding the Nova Corps.  Which minor characters do you want to see more of?

Following “Devils You Know,” the question on everyone’s mind is:  Who is Lash?

Ant-Man had a huge opening weekend in China:  $42.5 million.  That puts it at right around $500 million now.  How high do you think it will climb?

Anthony Mackie teased that Falcon and Ant-Man’s relationship “grows” in Captain America: Civil War.  It sounds like those two actors are a lot of fun on set together.

It is now official:  Thor: Ragnarok will film in Australia.  Oh, and so will Alien: Paradise Lost.

Side note on the subject of Anthony Mackie:  This is terrible.  Anthony Mackie endorses Donald Trump over Hillary Clinton and gets attacked by Hollywood and called an “Uncle Tom.”  Firstly, who in their right mind endorses Hillary for President?  I mean seriously, do you trust your doctor’s wife just because she’s married to your doctor?  Frankly, just about anyone would be preferable to Hillary!  And secondly, what kind of racist puts an African-American down for making an informed decision just because it happens to be of a conservative persuasion?  And yes, I do in fact mean that it is racist to call a successful African-American an “Uncle Tom” when his views do not conform to your racist belief of what he should think based solely on his skin color.

Well I bet that was a tangent you weren’t expecting from a geek news roundup!  Ahem.  Now back to your regularly-scheduled “Weekly MCU Review.”

Peyton Reed will be back to direct Ant-Man and the Wasp in 2018.  I think that’s a very good decision, considering what he managed to do after coming in at the tail-end of production for the first one.

Did you know that Vin Diesel is a big star?  He sure does; he can even use his star-power to tell Marvel they need to give him a good director and “dope script” if he plays Black Bolt.  Do you want to see him as King of the Inhumans?

Here is an interview with Mike Colter and Carie Ann Moss talking about Jessica Jones.  Thoughts?

We are now within a month of the release date for Jessica Jones, and the promotional material is going to start coming full-force.  First up, here is a 15-second motion poster.  And here is the official first trailer!  Initial reaction:  wow, is that dark…

The Michigan State Marching Band played a ton of Marvel music for their halftime show against Michigan last weekend.  Here’s the video.  I wish my marching band had done that!

Are you excited about the new Punisher and “International Iron Man” series that were just announced?

It sounds like Legion and Hellfire, the newly-announced X-Men TV series, will be largely separate though still in the X-Men universe.  Are you excited for these series?

Here is an interview with David S. Goyer where he opens up about the still-in-development Krypton TV series.  Are you interested in seeing what Krypton was like 200 years ago?

Here is the first official poster for Star Wars: The Force Awakens: 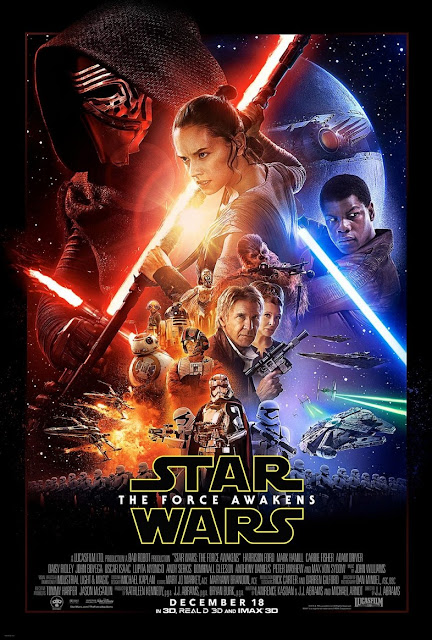 I think it looks pretty awesome.  What do you think?

And here is the next trailer for The Force Awakens!  Pretty awesome, right?

Star Wars: The Force Awakens made over $6.5 million in the first 24 hours of IMAX ticket sales.  Did you get yours?

Did you know that you can get Star Wars-, Avengers-, and Pokemon-themed toys from Build-a-Bear Workshop?

Is this a brilliant idea or a terrible one?