Another week, and more MCU news!  Agent Carter season 2 started this week, and we got a little more information about Doctor Strange.  Put some ketchup on your eggs, and catch-up on your Marvel news!

Expectations and review for the first two episodes of Agent Carter season 2, “The Lady in the Lake” and “A View in the Dark”.  Something I didn’t notice on my first watching was an Easter egg for “Tales of Suspense,” an Iron Man- and Captain America-related comic title.

On the subject of Agent Carter, here is an article I wrote about the introduction of Darkforce/Zero Matter on Agent Carter this season.

After missing last week, here is my review of Jessica Jones season 1, episode 8, “AKA WWJD.”

If you didn’t get a chance to see Agent Carter on Tuesday, you can watch it on Sunday from 9-11 PM Eastern Time.

Can you say “prophetic”?  Just a couple days ago MCUExchange had an article asking if Marvel was planning to leave Wong out of Doctor Strange.  And then Marvel announced Benedict Wong to play Wong.  I’m gonna just throw this one out there:  “The Benedict is strong with this movie!”

So Sony and Disney played a game of “Musical 2017 Release Dates” this week.  This means that Star Wars Episode VIII will not be released until December 15 (the same weekend as The Force Awakens.  Pirates of the Caribbean: Dead Men Tell No Tales was bumped up to May 26, the slot previously held by Episode VII.  Spider-Man got pushed up to July 7, PotC’s previous release date.  And Jumanji will come out on Spider-Man’s previous date of July 28.

There have been reports surfacing for quite a while to suggest that Marvel and Netflix are very pleased with Jon Bernthal’s portrayal of Frank Castle, a.k.a. the Punisher.  However, TV Line is reporting that Marvel TV and Netflix are developing a Punisher series to pick up with the character after his appearance in Daredevil season 2.  Of course this rumor has been going around for a while, and TV Line doesn’t reveal a source, so it may not be true—though it would certainly make sense.  Do you want to see the Punisher get a Netflix show?

Add another one to the “Impending Marvel Netflix Series” list:  Jessica Jones season 2, which was announced on Sunday.  There is also a teaser image: 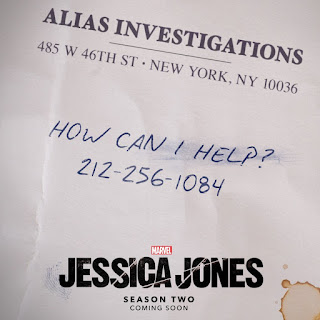 However, there’s nothing about when to expect it, and I don’t know if we should expect it this year, considering that they have Luke Cage (which will likely come out this summer) and Iron Fist (showrunner but no star yet) left to release before they can get to The Defenders.  If I had to make a guess on how they will handle their veritable glut of Marvel Netflix this year and next, here’s the schedule I would follow:

Bookending The Defenders with new properties would allow them to continue production on those series without over-taxing the actors involved with The Defenders.

Add another one to the list of Marvel comic books debuting on Free Comic Book Day:   Captain America: Steve Rogers.  Steve’s got his powers back in this one, and just in time for Civil War 2.  Are you looking forward to seeing Steve take up the shield again?

The new Thunderbolts comic book will also be making its debut in May, with a new team led by the Winter Soldier.  Considering the tie between the Thunderbolts and the phrase “Marvel’s Most Wanted,” I am very curious to see if the new Agents of S.H.I.E.L.D. spinoff will deal with the Thunderbolts (and this new comic).

Did you see all the DC movies news on Tuesday?  What are you  most excited for?

Loot Crate revealed a new “Firefly Cargo Crate.”  Do you want one?

If you want to get an email whenever I publish a new article, go to the top of the page and enter your email address in the box labeled “Subscribe to Mostly MCU Reviews” and click “Submit.”
Posted by MCUReviewer at 7:53 AM