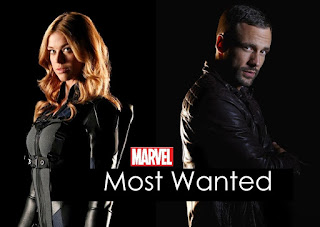 Remember how last week’s episode was the hundredth episode of MCU TV?  Do you realize that we’re already 14 episodes into the second hundred episodes?  And there’s probably at least another 42 episodes coming in the rest of this year!  MCU TV is just exploding!

And I think this one might be one of the best from a purely character standpoint.  “Parting Shot” really is Bobbi and Hunter’s show, and in my opinion the two of them absolutely nailed it.  This was most definitely a backdoor pilot for Marvel’s Most Wanted (even if the showrunners said they weren’t going to give it a backdoor pilot), and that showed throughout.  Bobbi and Hunter took center stage from the first scene pretty much to the end.  They fought and did spy-stuff together, but most importantly we explored their characters and their relationship.  If this episode is a model for what Marvel’s Most Wanted will be like, I think we’ll be pretty happy with the result.

This episode uses the flashforward format to reveal the results of the episode’s events before we even see the events themselves.  Bobbi and Hunter have been captured by Interpol and are being held in a Moscow facility while their friendly neighborhood Interpol agent interrogates them.  How did this happen?  We don’t need to wait too long to find out!

Bobbi and Hunter trailed Malick and his new Russian friend (Anton Petrov) back to Petrov’s facility in Siberia, which is inside what looks like a nuclear power plant.  While running surveillance on the compound, they observe a man on a gurney being rolled inside, whom they assume to be an Inhuman.  However, they are discovered by the perimeter guards, whom they subdue very quickly.  This surveillance scene was actually a lot of fun, even though there wasn’t a whole lot of action before the guards found them.  Instead, it is just Bobbi and Hunter interacting like a normal couple—if that normal couple were a pair of world-class super-spies!  Apparently they’ve never actually taken a real vacation; every time they’ve been to a tropical paradise it has been as part of a mission.

When the rest of the S.H.I.E.L.D. team (May, Mack, and Daisy) arrives, they split into groups to infiltrate the compound, uncover Malick’s plan, and find out about the Inhuman that they had seen.  Bobbi is the only one who speaks Russian, so she’s the only one who can actually get close to Malick and Petrov, which allows her to overhear their plans to stage a coup.  It turns out that the Inhuman is none other than the Minister of Defense, a KGB General who assassinated the Prime Minister’s personal attaché when the man expressed an “offensive” opinion of Inhumans.  Malick suggests that they solve their problem with the Prime Minister by allowing the General to assassinate him, giving them control of the country.  This is something that S.H.I.E.L.D. cannot allow, especially when they discover that the Prime Minister is actually on his way to inspect the facility that very night (one heck of a coincidence, but okay).

May and Hunter infiltrate the compound together looking to find the Inhuman and discover the attaché’s body, which they scan so Fitz and Simmons can work out a cause of death.  This is where things get a little odd:  it appears that he was killed by breaking his neck, but there aren’t any physical marks on his neck.  How did the Inhuman assassin kill him without actually touching him?  This also gives the two of them some time alone, during which May and Hunter finally work out May’s resentment toward him.  This gives Hunter an opportunity to explain his motivations.  Though Hunter does not feel loyalty to S.H.I.E.L.D. as an organization, he is incredibly loyal to the people he fights with.  She still feels hurt and angry because Hunter placed Andrew’s life in danger by attacking Ward even when he had people in place to kill Andrew (3x04, “Devils You Know”).  Hunter finally apologizes to her for his actions.  Considering the way the episode ends, this scene really was necessary.

They finally discover the Inhuman’s power when his shadow doesn’t move with him, and it’s actually really cool.  It turns out that he has a limited ability to manipulate Darkforce by controlling his own shadow, which serves as a form of Darkforce construct.  The effect they use to bring his shadow to life is pretty good; evidently Marvel took advantage of all the practice with Darkforce they got from Agent Carter season 2.  Daisy, Bobbi, and Mack attempt to fight the General, but are completely unable to destroy his shadow; even if they damage it, the General can simply send another one after them.  I’m not a huge fan of slow-mo fight sequences, but this one is okay.  They finally defeat the shadow-construct when Bobbi walks straight up to the General and shoots him several times, killing him.  Bobbi and Hunter are both arrested by the Russian military (they did just both kill cabinet members, after all).

The interrogation scenes start off really funny, with Hunter talking about nothing but mushrooms and mushroom soup while Bobbi drives the Interpol agent crazy by staying silent.  However, it’s not long before the agent realizes what their weaknesses are:  each other.  When Hunter is in danger, Bobbi all but crumbles (though she still refuses to speak).  And this, I think, is really what can set Marvel’s Most Wanted apart from Agents of S.H.I.E.L.D.:  where AoS has character dynamics, MMW will be driven by character dynamics.  These two really aren’t fully in control again until they are in the same room together.

Coulson and President Ellis do everything they can to rescue Bobbi and Hunter, but they can’t do very much without publicly acknowledging to the Russian Prime Minister that S.H.I.E.L.D. not only exists but is authorized by the U.S. government.  The Prime Minister doesn’t budge on his position, so Coulson puts a plan into motion to facilitate their escape, but they refuse the extraction.  Instead, they choose to be disavowed by S.H.I.E.L.D. in order to protect the rest of the team, even though this could mean the firing squad for them.  Coulson agrees to disavow them for the greater good, though he still succeeds in talking the Prime Minister into allowing them to walk free in gratitude for both saving his life and wiping out his opposition.

When Coulson returns to Zephyr One, the rest of the team is upset with the disavowal decision, but Coulson had no choice.  They couldn’t allow Russia to learn that S.H.I.E.L.D. is back up and running (and training Inhumans as agents) because that news could have started another arms race, along the lines of the Cold War, as both countries tried to stockpile Inhumans.  Of course, it seems like it’s only a matter of time before news gets out and other countries start recruiting and training Inhumans, just as they were trying to do with other enhanced people.  But at least this way S.H.I.E.L.D. can remain under the radar and keep from escalating the situation.

The scene before the final commercial break shows Bobbi and Hunter sitting in a bar and discussing their plans when they start receiving free beers from anonymous admirers.  They look around, and the entire S.H.I.E.L.D. team is there to see them off for the last time.  It’s a very emotional moment, as none of them can actually say anything or approach Bobbi and Hunter, but it is clear that they are all sad to lose them.  Based on that ending, I think it’s pretty safe to say that this is the final episode that Bobbi and Hunter will appear as regular cast members on Agents of S.H.I.E.L.D.

The final scene of the episode shows Malick shooting skeet with his daughter, who is fascinated with Hive.  I think it’s a safe bet that she is going to become important in an episode or two.  Will she be Madame Hydra?

This was a very good character-driven episode.  It set a definite tone and direction for Marvel’s Most Wanted.  It also preempted everyone’s question:  how much crossover will there be between these two shows?  Answer:  practically none.  Now that they have been disavowed, S.H.I.E.L.D. can’t exactly contact them for anything, or at least not while they are still under surveillance.  I do think they could still pull an end-around by finding a way to communicate through an intermediary so Coulson can bring them in on major things, but I doubt that will happen in the first season of Marvel’s Most Wanted; if it does, I wouldn’t expect it to happen before the season finales.

I am going to miss Bobbi and Hunter on Agents of S.H.I.E.L.D., but I’ve been waiting for them to cull the cast a little bit ever since it all-but-tripled last season.  This way they will have much more room to explore the other characters.  And it’s not like these two are gone; we’ll get an entire series about them next year!

What did you think of this episode?  What was your favorite moment of Bobbi and Hunter on Agents of S.H.I.E.L.D.?  Do you want to see more Darkforce-manipulating Inhumans?  I know I do!  Let me know your thoughts in the comments!