Another week, and more MCU news!  A few more stories about Ant-Man, a whole lot of Marvel Netflix rumors and reports, and even some Star Wars rumors.  Put some ketchup on your eggs, and catch-up (*ducks*) on your Marvel news!

Do you think Netflix should keep adding superheroes/villains to its Marvel series?  I personally think that we need more heroes.

This week's reviews:  Agents of S.H.I.E.L.D. season 1 episode 19, "The Only Light in Darkness," and episode 20, "Nothing Personal."  What did you think of these two episodes?

Here is the final installment of my Secret Warriors series, with my recommendations for team members as well as a couple of possible missions for them to go on.  And I also have a picture I made with the team.  What do you think? 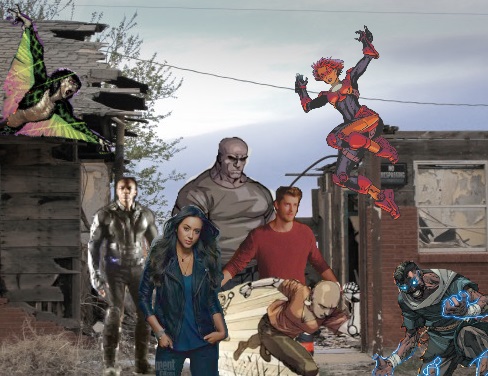 Finally, here are my thoughts on what Ant-Man means for the future of the MCU.  What future developments did you see hinted at in Ant-Man?

Here is a quick behind-the-scenes look at how Lola VFX de-aged Michael Douglas for young(er) Hank Pym in Ant-Man.  I thought it looked really good, but what did you think?

And in somewhat unsurprising news, Ant-Man beat Pixels at the box office last weekend (Note:  Ant-Man is now up to $119.5 million domestically).  I didn’t see Pixels, but I’ve seen/read enough reviews that if Pixels actually makes back its budget I will be very concerned for the future of humanity!

Here are some concept art designs for Wasp.  I’m still not a fan of how similar her original costume is to the Ant-Man suit, but I like a couple of the concept arts.

Huh.  Apparently Michael Douglas isn’t contracted for any more Marvel movies currently.  I’m a little surprised they didn’t sign him for at least 3 (a prequel and a sequel), but I guess they wanted to make sure the first one worked before considering future installments is the old Ant-Man.

Do you want to see Maria Hill in Captain America: Civil War?  She was asked about it recently and couldn’t say anything about it.

Would you be happy if the Spider-Man suit in Captain America: Civil War looked like this?  And while we’re at it, what do you think of the casting rumors lately?  I think my favorite one might be Hugh Laurie as J. Jonah Jameson.

Tom Holland is reportedly already done filming his Captain America: Civil War cameo.  What is your ideal Spider-Man scene for that movie?

Do you want Tilda Swinton’s Ancient One to be a man or a woman?  More to the point, how weird is it to actually have to ask that question?

Rachel McAdams is at least in talks for the female lead in Doctor Strange.  Do you want to see her join the MCU?  What character should she play?

John Francis Daley and Jonathan M. Goldstein have confirmed that they will be writing the Spider-Man reboot.  What do you want to see in it?

And now that we know who will be writing the reboot, we will be getting a lot more information about it going forward.  For example, they have said that the reboot will not be an origin story (something we already pretty much knew).  Does this mean we won’t even see bits in flashbacks?  Actually, I’m okay with them not doing an origin story; we’ve already seen it twice, so tossing a couple of lines of dialogue in should suffice.

Marvel released this image this week:
Could we be getting Gladiator in season 2 also?  We’re already confirmed to have Daredevil, Punisher, and Elektra showing up, so what’s one more superhero/villain?

Here is a release from Netflix clarifying its release schedule for the Marvel series.  Jessica Jones will be released by the end of the year, with Daredevil season 2 in early 2016.  ScreenRant adds that Luke Cage is coming out in early 2016 as well, which seems to contradict the previous link.  Regardless, they say that their plan is to release another series or season every 6 months or so (putting Jessica Jones in roughly October), with The Defenders coming after all 4 series have launched.  Does this mean that Luke Cage and Iron Fist are getting delayed because of Daredevil season 2?  I don’t think so; remember, last we heard it was another series or season every 8 months to a year—this reduced the time between by a couple months.  So even money we will get 2 or 3 seasons next year (Daredevil season 2, Luke Cage season 1, and possibly Iron Fist season 1), with The Defenders coming in 2017 along with 2 other series/seasons.

Along with the above, we also learned that Netflix is open to the possibility of a Punisher series after Daredevil season 2, and that any of the Marvel Netflix characters could receive feature films as well.  Would you rather those films be theatrically released or only on Netflix?

Interesting.  Apparently the reason we got Claire Temple as “Night Nurse” in Daredevil rather than Linda Carter is because they have plans for her in the movies.  Which movie would you like to see the “Night Nurse” in?  Doctor Strange does make sense, but Spider-Man is just as much of a possibility, especially if they’re going to play up Spidey’s street-level beginning.

According to Stephen S. DeKnight, the showrunner for Daredevil season 1, Jon Bernthal’s Punisher will be the most “Marvel” one yet.  Among other things, he will be a bit tamer than the R-Rated version from Punisher: War Zone so he fits with the “PG-16” tone of Daredevil.  What do you think?

Here is the new logo for Jessica Jones:
The worst thing:  they still haven’t announced a release date!

Evidently we will get to see Jessica Jones as a genuine hero in at least one (if not both) of her hero identities, along with costumes, but the series will quickly move past that.  Also, Claire Temple will be appearing on Jessica Jones. Does this news make you more or less interested in the series?  For me it makes me more interested.

We don’t even know when Jessica Jones is coming out yet, but there’s already a rumor of who the villain will be for the next Marvel Netflix show, Luke Cage:  Cornell Cottonmouth, an early Luke Cage villain who runs a drug dealing organization and possesses super strength.  Are you interested?

Agents of S.H.I.E.L.D. recently began production and released its first 2 behind-the-scenes pictures.  What are you most excited for?

Last week I mentioned that Chloe Bennet was getting a haircut to align more closely with Daisy Johnson’s hair in the comics.  Well, here is the final product.  What do you think?  I think it looks closest to the Avengers: Earth’s Mightiest Heroes version of the character, which I think looks better than the comic book version (which is much shorter).

A couple of casting announcements for Agents of S.H.I.E.L.D. season 2 came this week.  First up is confirmation that Dr. Andrew Garner (May’s ex-husband) will be returning for multiple episodes.  My guess is that he will be called in to evaluate some for the new Inhumans and Secret Warriors.  How do you think they will use him?

The other casting announcement is that Constance Zimmer will be appearing at the head of a new government agency which is also interested in the new Inhumans.  We don’t know any more than this, but my guess is that this agency will be at odds with Coulson—at least at first.  And if that’s the case, then we’ve already gotten casting announcements for 2 new antagonists, Lash and Constance Zimmer’s character.  What agency do you think this character represents?  What new Inhumans do you want to see this season?

George R.R. Martin recently said he was a fan of Ant-Man, but here’s another comment from the same post that is rather critical of the Marvel trope of giving the hero and villain the same powers.  I have to say that I agree with him—part of the reason I hope the next Ant-Man doesn’t have Ant-Man fighting another Pym Particle-powered character.  There is a place for having a hero fight a similarly-powered villain, but the benefit of Marvel comics is that the characters don’t have to have the same powers.

Is Gambit in trouble?

Chris Pine is now semi-confirmed to be playing Steve Trevor (Wonder Woman’s love interest) in the DCEU.  Do you like this casting or would you have preferred that he play Hal Jordan… or would you like them to combine the two into one?

If the DCEU takes off, would you be on board if they eventually adapt Batman Beyond and have Batfleck pass the mantle to Terry McGinnis?

Has Return of the Jedi never made a profit?  That seems unbelievable.

Lucasfilm and Netflix are in talks to bring a string of live-action Star Wars TV series to the streaming service.  What do you want to see from these series?  My vote would be to fill in the time between RotJ and TFA.

According to rumor, Felicity Jones will be playing the daughter of a major Star Wars villain in the Anthology film Rogue One.  What would you think of this idea?

The showrunners are planning for Game of Thrones to end after 8 seasons.  What do you think?  I’ll be honest:  I don’t watch that show at all, partly because I never got into it (though I did read the first book), and partly because I’ve heard really bad things about its portrayal of women, gratuitous sexual violence, and the like.

Are you a Miyazaki fan?  Do you want to own his collected works on Blu-Ray?  You don’t have long to wait.

Is this for real?  I really hope not.