Another week, and more MCU news!  Agents of S.H.I.E.L.D. season 3 starts in 84 hours, Marvel is announcing new comics, and actors are opening up about their MCU future.  Put some ketchup on your eggs, and catch-up (*ducks*) on your Marvel news!

From last Saturday, my thoughts on the rumored slate for Marvel Netflix Phase 2.   What characters do you want to see after The Defenders?

First up for the new week was my review of the Agent Carter season 1 finale, “Valediction.”  What was your favorite part of season 1?

Here are my thoughts on Lash’s character from the comics and how that story could translate to Agents of S.H.I.E.L.D. season 3.  How do you think Lash will be connected to everything?

Marvel’s announcement that Constance Zimmer’s character is named “Rosalind Price” changes things slightly, but here are my thoughts on the Advanced Threat Containment Unit and what it might represent.  What to do you think the A.T.C.U. is?

So apparently Ant-Man still hasn’t made its China premiere, but that’s changing soon.  Here is a new poster specifically for China, featuring the Ant-Man/Yellowjacket fight.  Ant-Man has already made $400 million worldwide without China, more than The Incredible Hulk and Captain America: The First Avenger, and almost as much as Thor.  Additionally, domestically it has surpassed both those movies ($177 million vs. $176.6 million for Captain America: The First Avenger and $130 million for The Incredible Hulk).  All of that, and it was the lowest-budget Marvel movie to-date.  How much do you think it will make total?  I was predicting around $400 million right when it first came out ($150 domestic, $250 international), but that is definitely low.  My guess now would be around $500 million, especially if it does really well in China.

In case you can’t wait for Hope to suit up as the new Wasp to see more Marvel female hero action, here is a concept art of Janet Van Dyne as the original Wasp: 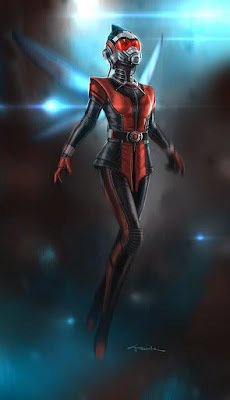 What do you think of it?  As I’ve said before, I like it, but I wish there were a little more to distinguish it from Ant-Man.

Here’s a description of the Captain America: Civil War footage shown at AsiaPop Comic Con in the Philippines.  What do you think of the description?  I think it looks really cool, though I want to wait until we actually see a trailer to talk too much about it.

Elizabeth Olsen doesn’t know if there will be a Scarlet Witch solo movie—or if there even should be.  I don’t really know enough about her from the comics (outside of the reality-changers like House of M and M-Day) to say if there are any stories that could provide a template for a solo movie, but I think a Scarlet Witch/Vision movie which takes some cues from the West Coast Avengers would be interesting.  Would you like to see her get a solo movie?

Marvel is now sort-of rebranding Avengers: Age of Ultron as something of an origin story/direct lead-in to Captain America: Civil War.  It was already kind of understood that way, but they’re really pushing that connection in advance of the AoU home release.  Are you getting the DVD/BluRay?

No surprise here:  Sean Gunn will be back for Guardians of the Galaxy Vol. 2 as Kraglin, Rocket (on set), et al.  What do you want to see from this movie?

Another unsurprising GotG2 announcement:  Iron Man won’t be in it.  Was anyone really expecting him to be in it?

Peter Parker will be 15 in the new movie—or at least that’s the way I’m reading Director John Watts’ comments.  I suppose he could just as easily be saying that Peter Parker is 15 “now” (meaning in Civil War), meaning that he will be 16 in Spider-Man, but unless they clarify it otherwise, I’m going to guess that Peter is 14 in Civil War and 15 in Spider-Man.  Does this align with your expectations?

Marc Webb, the director of The Amazing Spider-Man duology, said this summer (it’s only coming out now) that he thinks Spider-man belongs in the MCU.  I have to say, I agree with him.

Update on the Blade front:  talks have been promising.  Do you want to see Wesley Snipes’ Blade in the MCU?

Also on the other-universe-movie-that-could-be-fit-into-the-MCU front, Drew Goddard said recently that his Sinister Six movie idea could be fit into the MCU fairly easily because he was approaching it like a “summer annual” which pulled the characters out, put them on an adventure, and then put them back into their life.  If you remember, I said over the summer that Sony could easily produce a Sinister Six movie as part of the MCU after the Spider-Man reboot introduces a couple of villains, but that it would be a distinctly MCU movie:  villains pulled from both Spider-Man lore and the MCU (specifically The Defenders and related series).  Do you think the Sony and Marvel will make a Sinister Six movie?  Which villains do you want on the team?

Elizabeth Olsen was asked about her MCU future and replied that she doesn’t yet know if she’ll be in the Infinity War movies.  My two cents:  keep your calendar clear in 2017-2018, because you’re probably in at least one of them.

Do you want to see more Loki in the MCU?  Personally, I want to wait and see what Thor: Ragnarok does with his story before talking about his future in the MCU.  But he’d better be in Ragnarok in some capacity, considering that he’s masquerading as Odin!

Here is a new poster courtesy the Agents of S.H.I.E.L.D. Twitter feed: 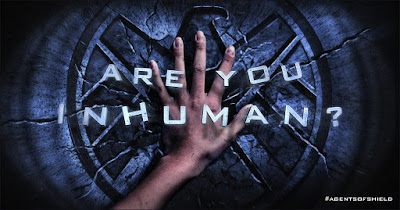 Are you excited for Tuesday?  I know I am!

With Agents of S.H.I.E.L.D. returning on Tuesday, I was thinking about writing a summary of the main characters and their arcs.  However, MCU Exchange beat me to it!  If you’re new or need a refresher, check out their preview for the characters.  What do you think of their summaries?  I agree with just about everything except their statement that Coulson will be pro-registration.  I personally think he may start off that way but change sides quickly if he sees the pro-registration side going to the kinds of extremes which Gonzales was proposing.  He’s been on the leading-edge with enhanceds for his whole career, and he likes the idea of working with them.  However, if the “Accords” start leading to people attempting to eliminate enhanced people for no other reason than that they are enhanced—and taking advantage of the Index to do it—I think he will reject the Accords and work to protect enhanced people.

That really escalated quickly:  S.H.I.E.L.D. brought in some super-powered back-up for their second Dubsmash War video:  Supergirl, Batman, and Deadpool.  Okay, I gotta ask:  who wins in a fight between Batman, Supergirl, Deadpool, and Quake?

IGN has a preview of the first 4 minutes of the Agents of S.H.I.E.L.D. season premiere—and YouTube has a version you can actually watch!  It looks really good, especially seeing both the new Inhuman and Quake in action!  Oh, and we also get to see S.H.I.E.L.D.’s new technology:  a giant Quinjet and an escape pod-thing that can launch someone into the air and be collected by the giant Quinjet.  What do you think of it?

Marvel has released photos and a synopsis for the second episode of Agents of S.H.I.E.L.D. season 3, “The Purpose in the Machine.”  I think this is the episode when we will find out what happened to Simmons, and Professor Randolph will be back to help with it.

Here’s another poster for Agent Carter season 2, this time focusing on Peggy herself. 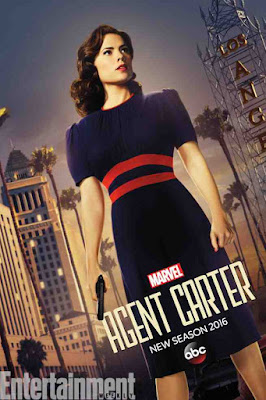 What do you think?

Check out this teaser trailer for Jessica Jones.  Well, she’s definitely got super strength there!

If he does a superhero movie, Matt Damon would like to play Daredevil if Christopher Nolan is directing it.  Sorry, Matt, but we already have our Matt Murdock.  Oh, and I don't think Matt Damon could have saved the 2003 Daredevil movie, either.

Here are set photos from Luke Cage, which confirm another cast member:  Frankie Faison, though his role is unknown.  Mike Colter is definitely looking the part in these photos.

Unsurprisingly, Marvel announced a new Black Panther series as part of the “All-New, All-Different Marvel.”  Evidently it will “move his story forward” as he deals with an uprising in Wakanda.  What do you think?

Here are some new costume designs for the All-New, All-Different Inhumans, as well as Human Torch.  They are evidently inspired by the movies’ emphasis on functionality.  What do you think?

Moon Knight will be in the All-New, All-Different Marvel, but he’ll be in completely new and different circumstances than the character has ever been in before (but perhaps where he’s belonged all along…):  a mental institution.  Do you think this is a good move for the character?  What do you think the story will be with this?

Colossus will get quite a bit of screen time in Deadpool.  What are you most looking forward to from this movie?

According to the producer, X-Men: Apocalypse will serve as the “culmination” to the First Class trilogy while setting up the future of the franchise.  Do you think they will get the X-Men back on track (continuity-wise) with this movie?

Hugh Jackman wants Tom Hardy to replace him as Wolverine.  What is your fantasy casting for the new Wolverine?

Hayden Christiansen is rumored to be returning to the Star Wars universe as Anakin Skywalker/Darth Vader in Episode VII.  Do you want to see him back?  Personally, I actually hope he comes back.  Maybe with better direction he can turn in a performance worthy of the most-feared villain in all Star Wars!

Are you going to download the Star Wars Battlefront Beta next month?  I’m pretty sure I will be!

Colin Trevorrow opened up about his plans for the sequels to Jurassic World.  Among other things, it sounds like Claire will get a full character arc over the course of the trilogy, which can only be good.  He also said that the sequel will look into the idea of “open source dinosaurs.”  Do you want to see a sequel to Jurassic World, and if so, what do you want to see in it?

Not exactly Geekdom-related (though it is based on a ridiculously nerdy book series…), but Paramount has decided to reboot Tom Clancy’s Jack Ryan as a TV series.  I would definitely love to see a TV take on Jack Ryan—as long as it is more faithful than the 4 most recent movies (and not standard Michael Bay fare)!  I get that they need to make changes from the book, but when I think of Jack Ryan, I think more along the lines of the Hunt for Red October Jack Ryan (young Alec Baldwin) than the Harrison Ford or Ben Affleck versions of the character:  he’s an analyst forced into field assignments, not the other way around.  Would you like to see this series come to fruition?

After that little detour, here’s something nice and geeky to sink your teeth into:  iPhone users prefer Superman over Batman and Star Wars over Star Trek, while Android users prefer the opposite.  So here’s my question:  if I use an Android phone and an iPod, what does that say about my preferences?