Another week, and more MCU news!  This week we got some news on Doctor Strange, Thor: Ragnarok, and even Ant-Man and the Wasp.  Oh, and Jessica Jones is only 7 days away!  Put some ketchup on your eggs, and catch-up (*ducks*) on your Marvel news!

The next in a long line of Iron Fist rumors:  Marvel and Netflix might turn the series into a Netflix Original Movie.  I wouldn’t be upset if they did that, but I would be upset if they took that as a reason not to include Iron Fist in The Defenders.

While we’re on the subject of Iron Fist, here’s an article that managed to perfectly divide Reddit!  Does Marvel Studios have any options for Asian or Asian-American heroes, and should they consider making Danny Rand and Asian-American?

And then here are my thoughts on the potential “Secret Warriors 2.0” that they seem to be building up on Agents of S.H.I.E.L.D.  What’s your ideal Secret Warriors roster?

Check out the first photos of Chiwetel Ejiofor as Baron Mordo.

Amy Landecker is joining the cast of Doctor Strange.  Who do you think she’s playing?

Scott Adkins has also reportedly been cast in Doctor Strange.  The article says he will have some hand-to-hand combat scenes, so could he be playing Wong?  He’s not exactly Chinese, though… but then again, neither is Tilda Swinton!

There’s a rumor that Thor: Ragnarok will feature a major female villain.  My guess is that Amora the Enchantress will appear—and I also think her sister Lorelei will be there as well, following her brief appearance on Agents of S.H.I.E.L.D.  I mean, Loki having Lorelei under his control is too big of a plot thread to just leave dangling.

After finding out recently that Peyton Reed will be back to direct Ant-Man and the Wasp, news came out this week that Adam McKay “may” be back to write the sequel.  I don’t see any problem with that possibility either, considering what he and Paul Rudd were able to do in a short timeframe with Edgar Wright and Joe Cornish’s original script.  I do think it would be cool if Adam McKay also got a chance to direct a Marvel movie in Phase 3 or 4.  He has expressed interest in The Inhumans in the past!

Marvel is also courting Michael Douglas to return for Ant-Man and the Wasp.  You’ll remember that he only received a one-picture deal, so it’s not a guarantee that he’ll be back, but I’m pretty sure it’s just about guaranteed that he’ll be back.

What do you think of this “final trailer” for Jessica Jones?  Me, I just can’t wait for next Friday!

Another round of Jessica Jones reviews just hit the internet, along with a new poster: 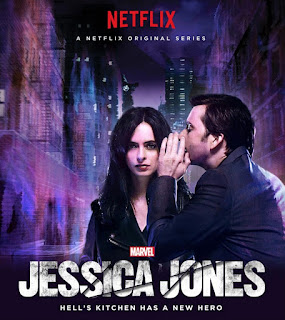 To quote myself:  “I just can’t wait for next Friday!”

Should Katie Sackhoff play Felicia Hardy, a.k.a. Black Cat, in the MCU?  More importantly, where (if anywhere) should Black Cat appear?  Personally, I think she could fit in well in the Netflix corner of the universe, though with Spidey jumping straight into the movies I’m not sure if Marvel and Sony will want to put such a major Spidey supporting character in the Netflix shows.

Evidently Suicide Squad is going to have a PG-13 rating.  Disappointed?

Production on Wonder Woman is starting very soon in England.

Mera, Queen of Atlantis, is rumored to make her debut in Justice League Part 1.  Excited to see another DC lady join the cast?

Lucifer will premiere Monday, January 25, in the 9 PM Eastern slot on FOX.  Are you going to watch?

Now that Constantine is officially a part of the DCTVU after Matt Ryan’s John Constantine appeared on Arrow, fans have started a petition to have the series revived on another network.  Are you behind this?

Huh.  So Time Warner is considering holding back seasons of their DC TV shows for an extra year or two before putting them on Netflix.  I really don’t see the benefit of this for them, considering that this decision is less likely to make consumers like me buy a cable subscription and more likely to make consumers like me just pass on the shows all together.

Star Wars: The Force Awakens will have a runtime of 2 hours and 15 minutes.

If you want to see Jem and the Holograms, you’ll have to wait a couple weeks for them to release it on BluRay and DVD because Universal just pulled it from theaters after a dismal 2 weeks.  To give you some perspective, on a $5 million budget it grossed $2.1 million over 2 weeks in 2,413 theaters, for a whopping $545 per theater.  Ouch.

If you want to get an email whenever I publish a new article, go to the top of the page and enter your email address in the box labeled “Subscribe to Mostly MCU Reviews” and click “Submit.”
Posted by MCUReviewer at 6:04 AM