According to Ciara McAvoy, a Scottish movie poster artist, Marvel has a Captain Britain series in development and she was hired to paint a teaser poster for it!  In a follow-up Tweet, McAvoy revealed that there are producers attached to the project (and their names), and they are working on a sizzle reel in advance of bringing it to Marvel.  A definite announcement may have to wait until late 2016 or early 2017, however.  Evidently this is not an official Marvel Studios project, but a project being spearheaded by fans looking to receive Marvel’s blessing if they like the pitch.

With that in mind, I thought I would try my hand at helping those producers out with my own ideas of what would make for an interesting Captain Britain TV series.

Now, I already talked about Brian Braddock, a.k.a. Captain Britain, in my “National Heroes” article and when talking about Union Jack’s rumored appearance in Captain America: Civil War.  However, in this article I will highlight the kinds of things which could have some bearing on a possible Captain Britain TV series.

History of the Character

Brian Braddock was born to an aristocratic English family as one of three children.  He has an older brother as well as a twin sister.  Interestingly, his twin sister Betsy is actually the telepathic mutant Psylocke (who is appearing in X-Men:  Apocalypse played by Olivia Munn).  Brian himself was not born with any superpowers, but instead received his superpowers from Merlyn after being grievously injured while attempting to escape a criminal on his motorcycle.  In exchange for Brian’s agreement to become the mystical guardian of Britain, Merlyn offers him a choice between two mystical artifacts, the Amulet of Right and Sword of Might, of which he chooses the Amulet.  Using the power of the Amulet, Brian becomes Captain Britain and protects Britain from mystical and inter-dimensional threats.

As Captain Britain, Brian Braddock has fought alongside many other superheroes, including the British super agencies S.T.R.I.K.E. and MI: 13.  While studying abroad in America, Brian roomed with Peter Parker, and the two would go on patrols together, though Brian never discovered that Peter was really Spider-Man.  He has also fought alongside Black Knight and Union Jack, among other British heroes.  In addition, Brian was a founding member of the British mutant hero team Excalibur after the X-Men were presumed killed.

One of Brian’s longtime associates in the comics is Meggan Puceanu, a Gypsy mutant with the ability to shapeshift, sense other people’s emotions, and take on the powers of other superhumans by copying their appearance.  The two teamed up quite regularly in the comics, with Meggan serving as a love interest for Brian and eventually becoming his wife.

Throughout his comic book history, Captain Britain has alternately fought supernatural threats to the mystical side of Britain as well as inter-dimensional threats.

All of Captain Britain’s superhuman abilities are originally derived from the mystic artifacts he uses—the Amulet of Right and a mystical staff.  However, over time his powers come to be more and more inherent and become less and less based on his access to the amulet.

The Amulet gives Captain Britain all of the standard superhuman enhancements:  strength, speed, stamina, durability, reflexes, and senses, similar to Captain America.  However, where Steve Rogers was physically enhanced by the Super-Soldier Serum, Brian Braddock remains his normal size and strength when not using the Amulet; using the Amulet actually transforms his body into a much more muscular version of itself.  In addition to these standard abilities, Captain Britain also has the ability to see mystical and cloaked objects.

Thanks to a mystical staff which Merlyn gave him (and which he modified into a mace) he is able to fly at supersonic speeds.

His final “ability” is that he and his twin sister (Betsy Braddock, a.k.a. Psylocke) share a psychic bond thanks to her mutant psychic abilities.

I think the most important supporting character they could introduce to this show is Betsy Braddock, Brian’s twin sister.  Their sibling dynamic is something we really haven’t seen much of in the MCU to-date—Quicksilver died much too soon for them to really explore the twin dynamic with him and Scarlet Witch.  I’m not entirely sure how the rights would work with Betsy, however, considering that she is a mutant and we know that FOX owns the movie rights (at least) since she’s appearing in X-Men:  Apocalypse.  Given the Captain Britain connection, however, I’m going to guess that Marvel can use the character as long as she is not a mutant.  For this reason, if she can appear in this series, I would either make her non-powered or have her innate psychic abilities be activated by exposure to Merlyn’s magic at some later date.

Brian Braddock has a couple of love interests in the comics, but Meggan Puceanu is the one with whom he shares the most history.  Since she is (likely) a mutant there’s a question of whether Marvel can use her rights, also.  If they can, I would probably alter her back story to make her an Inhuman with some similar abilities:  reactive evolution and shapeshifting.  I wouldn’t give her all the same powers, however; she is really overpowered in the comics, at least by MCU standards.  Given her outsider status as both a Gypsy and an Inhuman, she would bring something very different to this series.

In addition to these two, Merlyn would have to appear to give Brian Braddock the choice to become Britain’s champion by taking the Amulet of Right (assuming that they remain faithful to the comic book origin).  I would probably keep him as a mentor of sorts to Brian and as someone who manipulates Brian into doing his bidding.

The series would of course need villains as well, and Captain Britain has a number of them.  One interesting possibility is to use Mastermind, an artificial intelligence created by Brian’s father which went crazy and had Brian’s parents killed.  This would be very similar to Avengers: Age of Ultron, however, so they may not want to copy the idea of a murderous A.I. so soon.

Moving on to minor and recurring characters, there are a few that I would try to bring in if I were pitching this series.  The first—and I think most obvious—is Joseph Chapman, the third Union Jack.  Union Jack and Captain Britain have something of a friendly rivalry in the comics, in part because the technologically-powered, working-class Union Jack makes an excellent foil for the mystically-powered, aristocratic Captain Britain.

Other options for heroes who could appear in this series include Shang-Chi (following his rumored appearance on Iron Fist), who spent time as an MI: 6 agent in the comics.  In a later season, they could also introduce other British heroes like Black Knight and Spitfire.

Given Captain Britain’s 40-year publication history as well as the wide variety of threats he has faced, a Captain Britain TV series could go in a number of different directions in terms of plot.  Here are a few options for season-long focuses:

The first season of the series could focus in on the characters and their dynamics, as well as introducing and exploring Captain Britain’s powers.  The mystical elements could come in a little bit, but I don’t think that should necessarily be the focus for the first season.  Towards the end of the season, however, I would start bringing in the mystical elements full-force (in advance of giving the mystical side more time in the second season), one of which could involve Betsy’s psychic abilities being activated by her proximity to Merlyn’s magic.

In the second season I would start expanding on Britain’s superhero community through MI: 13 (which could either be a separate British spy agency or the British arm of S.H.I.E.L.D.).  If Union Jack appears in the first season, then it would be easy enough to use him to introduce Spitfire (the daughter of the previous Union Jack who has superhuman speed and is the current Union Jack’s lover).  Black Knight is another uniquely-British hero who would fit in well with the mystical elements of Captain Britain.

A future season could see Captain Britain exploring the concept of a Marvel live-action multiverse (same as The Flash is doing in its second season) as a way to tie together the Marvel and FOX cinematic universes, as well as other cinematic “universes” represented by various Marvel movies.  In the comics it is well-established that every universe has its own “Captain Britain” who is part of the inter-dimensional “Captain Britain Corps” and responsible for protecting both his own version of Britain and his universe.  This could offer a way for Marvel and FOX to cross over, if FOX were at some point given permission to introduce its own Captain Britain who is Psylocke’s brother.  At this point a good season-long threat could be Mad Jim Jaspers (even if he is a mutant).  However, I do not think that Captain Britain should really start exploring the multiverse for quite a while; he needs to explore and confront threats to his own reality before doing the same in other realities. 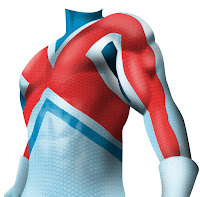 So if I were one of the fan-producers putting together this series pitch to bring to Marvel, I would highlight the following elements in my pitch.

First, I would emphasize that this fills a definite niche in both the Marvel Cinematic Universe and the modern comic book TV/movie enterprise:  that of the international hero.  As of now there are very few truly international heroes receiving their own movies or TV series.  Marvel has Black Panther, who will be introduced shortly in Captain America: Civil War, and they just introduced Elena “Yo-Yo” Rodriguez and Eden Fesi, a.k.a. “Manifold,” in back-to-back episodes of Agents of S.H.I.E.L.D.  Wonder Woman is going to be at least somewhat international in the DC Extended Universe, but those are really the only international heroes out there; just about all the other heroes in live-action media are based in America (including the Sokovian Scarlet Witch).  Captain Britain would add a truly international flavor to the MCU, just as much as Black Panther’s appearance in Civil War will do.

Second, I would point out the cross-medium synergy that is possible in terms of the mystical elements of the MCU.  Doctor Strange is set for release this November, followed by Iron Fist sometime early next year, and both of those will begin to open up Marvel-Mystic in the MCU.  A hero like Captain Britain, whose physical abilities come from the mystical and who fights magical threats despite not being particularly magical himself, offers an interesting counterpoint to a kung fu master like Iron Fist who also employs mysticism in combat and a straight-up magician like Doctor Strange.

These kinds of projects have a very low chance of being made—at least as part of a larger cinematic universe (c.f. Star Trek).  However, I do think that this one would be a win-win for both Marvel and the producer.  Perhaps Marvel will see it the same way!

If you want to get an email whenever I publish a new article, go to the top of the page and enter your email address in the box labeled “Subscribe to Mostly MCU Reviews” and click “Submit.”
Posted by MCUReviewer at 2:00 PM

Email ThisBlogThis!Share to TwitterShare to FacebookShare to Pinterest
Labels: Captain Britain, Rumor Has It