The Weekly MCU Review for June 7


Another week, and more MCU news!  More information about Captain America: Civil War and Ant-Man, Marvel after Secret Wars, and more.  Put some ketchup on your eggs, and catch-up (*ducks*) on your Marvel news!

Do you think that the MCU needs young heroes like DC’s in-development Titans series?  I do.  Who would you want as part of it?

Here is my review of Daredevil season 1, episode 8, “Shadows in the Glass.”  What do you think of this episode?

Did you know that Agents of S.H.I.E.L.D. has been giving us origin stories all along?  Here are my thoughts on AoS and origin stories (Part 1 and Part 2).

El Mayimbe gave a number of insights for Marvel’s TV future, including the Inhumans on AoS and in the upcoming movie.  Here are my thoughts on the subject.  Do you agree with me, or am I off base?

So Avengers: Age of Ultron has passed Iron Man 3 and Frozen in the worldwide box office.  How much more do you think it’s going to make?

Courtesy Brian MichaelBendis comes this tweet with the first poster for A.K.A. Jessica Jones. 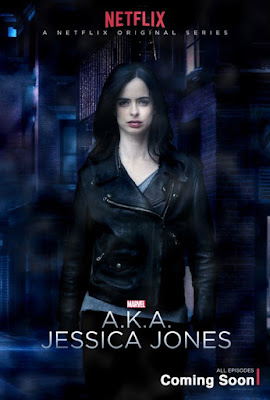 I like this poster, especially how it fits into the same pattern as the Daredevil character posters. The worst thing about the poster is that there isn’t a premiere date!  Are you excited for the second Marvel Netflix installment?

Did you follow Hayley Atwell’s exploits on the set of Captain America: Civil War?  I wish I could get that kind of behind-the-scenes access!

There’s a new Ant-Man TV spot out.  Or I should say there’s another look at some of the same footage from the second trailer.  Here’s the extended version.  Do you think they should release a million TV spots like Age of Ultron did, or are you fine with Ant-Man holding a lot back?

Iron Man is in the house to start filming for Civil War!  Whose side are you on?

At least one important actor has finished his Captain America: Civil War filming.  Yes, Stan Lee has filmed his cameo!  What do you think Stan’s going to be doing in Civil War?

In exciting (but somewhat unsurprising) news, Lincoln has been upgraded to a series regular for Agents of S.H.I.E.L.D. season 3.  How do you think he will fit in?  My guess is that he is Skye’s first recruit for her Secret (Warriors) Team.  However, ScreenRant suggests that he could work with Skye as a Transitioner to help the new Inhumans transformed by fish oil.  I don’t think those two options are mutually exclusive.  Either way, I can’t wait to see how they use him!

As a follow-up, Mack has also been upgraded to series regular for next season.  Are you excited to see more of Mack?

It shouldn’t be overly surprising that Marvel is rumored to be putting some Spider-Man Easter eggs into Ant-Man.  It was pretty late in the game for Ant-Man when the deal was struck, but it is still possible for them to reference Spider-Man or OsCorp on a couple of occasions.  The rumor is that OsCorp may be one of the companies Darren Cross is trying to sell Pym Particle technology to.  As long as things are organic and smooth, I’m looking forward to seeing how they start working Spider-Man in!  Maybe next up they will have a couple strands of webbing hanging from a building in A.K.A. Jessica Jones!

A director shortlist was released this week for the new Spider-Man reboot.  Any names catch your eye?

The first script draft for Guardians of the Galaxy 2 is officially done.  And it brought tears to Chris Pratt’s eyes.  Of course, they’re going to demand a gazillion changes…  As of now, there are less characters, and only one new character.

Age of Ultron has crossed $900 million internationally, putting it at $1.3 billion total.  Wow.  What do you think Marvel and Disney are doing with the money?  Taking a Scrooge McDuck money bath?

So no one has talked to Chris Pratt about the Guardians and Avengers teaming up.  Or at least according to Christ Pratt they haven’t.  Do you think the 2 teams will cross paths one of these years?

Rumor has it that Martin Freeman’s role has been revealed.  Do you think this rumor is true?

Samuel L. Jackson is looking to re-up his Marvel contract, but he’s not in Captain America: Civil War.  Where do you think he’ll show up next?

The Winter Soldier now has a beard.  Is this going to be his version of Ward’s “evil antihero scruff” from season 2?

Here’s a promo picture for Crossbones.  What do you think?

Jason Statham for Bullseye?  No, apparently.

So The Last Airbender (M. Night Shyamalan’s adaptation of Nickelodeon’s Avatar: The Last Airbender) still has one defender:  Shyamalan himself.  And according to him there are kids out there who have seen the movie 74 or more times!  Were you a fan of the TV series?  What did you think of that movie?  How sorry do you feel for the parents who’ve had to endure 74 viewings of The Last Airbender?

Batman’s role in Suicide Squad, possibly revealed.  Only look if you want to know.  Excited for the movie?

The second Star Wars Anthology film is reported to be about Han Solo and Boba Fett’s rivalry.  First Captain America vs. Iron Man—I mean, Captain America: Civil War—then Batman vs. Superman, and now Han Solo vs. Boba Fett… is Hollywood on a “vs.” kick lately?  What “vs.” movie do you want to see next?

There is a rumor going around that Lucasfilm is thinking about making an Obi-Wan Kenobi-led Star Wars Anthology movie.  What do you think?

Here is a new magazine cover of the new Fantastic Four.  Are you excited for the reboot?

New Batman v. Superman rumors, this time the weapon that Batman is going to use against Superman.  Thoughts?

Here’s an interesting interview with the President of WB about the differences between Marvel movies and DC movies.  I really didn’t see anything in his statement that sounded different from what Marvel does, so what’s the difference in approach?

In somewhat unsurprising news, Marvel announced that they are going to reboot all their titles from #1 after Secret Wars.  However, check out the picture they used to make the announcement: 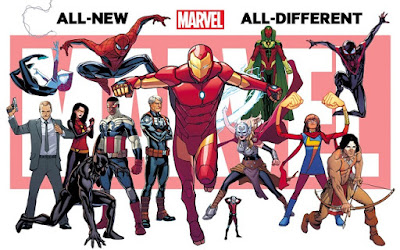 2 Captain Americas, 4 Spider-People, and a Native American hero believed to be Red Wolf.  Of the characters presented, there is only 1 who is highly unlikely to appear in the movies in some way, shape, or form any time soon:  Spider-Boy (they’ve got to figure out some way to distinguish between Pete and Miles, amiright?).  Spider-Gwen may not appear, but Gwen Stacy could.  Jane Foster might never pick up Mjolnir, but she has already made 2 appearances.  Of the characters shown, I would love to see any of them in the movies.  But first, I think I’m going to see about actually reading their comics!

Here’s another image Marvel released to tease the Marvel Universe after Secret wars. 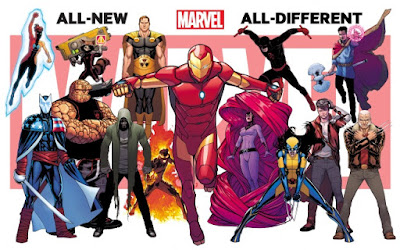 What do you see in here?

The Thing may be joining the Guardians of the Galaxy after Secret Wars.  Too bad he can’t join them in the MCU…

And another post-Secret Wars revelation:  X-23 is taking over as Wolverine.