Another week, and more MCU news!  New York Comic-Con is this weekend, bringing with it a ton of new announcements and posters.  Put some ketchup on your eggs, and catch-up (*ducks*) on your Marvel news!

First up, my take on the news of Marvel's Damage Control, coming to ABC next year.  Are you excited for this series?

In anticipation of last week's Agents of S.H.I.E.L.D., here is a quick bio of Professor Elliot Randolph, AoS' resident Asgardian.  What did you think of his appearance in the episode?

Speaking of Agents of S.H.I.E.L.D., here are my expectations and review of the episode, season 3, episode 2, "Purpose in the Machine."  What was your favorite part of the episode?

I also published my "Dream Lineup for the Avengers post-Infinity War."  What do you think of my selections?  What is your "dream team?"

Continuing my rundown of "The All-New, All-Different Marvel and the MCU," here are all of the new teams without an MCU equivalent.  Which do you want to see in the MCU?

I didn't have anything new to write about yesterday, so I'm sorry I didn't have a new article then.  If you have any ideas for what you'd like to know before the next episode on Tuesday, let me know today.

Apparently Loki was cut from Avengers: Age of Ultron because test audiences thought that Loki was somehow behind Ultron.  I guess that makes sense.

Here is an interview with Eric Oram, Robert Downey Jr.’s personal fight coordinator, in which he talked about Iron Man fighting Cap (if that actually happens).  He says that over time Iron Man has learned that he needs to exert control to avoid too much collateral damage, so he would use the minimum amount of force necessary to win.  That’s pretty much what I would expect, though I think Cap could hold his own against Iron Man in a straight-up fight based on his experience and tactical knowledge.  Who do you think would win?

So apparently the Sneepers will be allowed to appear in Guardians of the Galaxy Volume 2.  Crisis averted?

However, Benicio del Toro is definitely back as the Collector in Guardians of the Galaxy Volume 2.

Jon Watts is not ruling out the possibility of Mile Morales appearing in the new Spider-Man movie.  Of course, what else was he going to say?  Personally, I expect Miles Morales to appear in the MCU sooner or later, but not to have powers until Phase 4 at the earliest.  I think rushing Miles Morales into the universe in the first Spider-Man movie would do both characters a disservice.  But when (if at all) would you like to see Miles Morales in the MCU?

Marvel is rumored to be considering F. Gary Gray to direct Black Panther.  Additionally, they are rumored to have a writer attached.  We probably won’t find out too much about this movie for another year or so, but what do you think of this news?

Marvel made some major changes to their release schedule this week.  Check it out below:
The announcement of an Ant-Man sequel which will introduce Hope as the Wasp (and potentially deal with Scott and Hope’s quest to rescue Janet from the Microverse) really doesn’t come as much of a surprise considering that Kevin Feige previously stated he wanted Hope to get more of an introduction as the Wasp than a quick cameo in Captain America: Civil War.  The fact that Ant-Man has earned $178.5 million domestically and $409.8 million globally even before opening in China (all on a $130 million budget) certainly doesn’t hurt matters.  Let the rampant speculation commence!  What do you think Ant-Man and The Wasp will be about?  What do you think the 3 unannounced movies will be?  Personally, I’m hoping they won’t give us any indication on what the movies are (or at least are about) until 2019.  Of course, the only way to do that would be for all three to be either team-ups or new characters.

Will the 2-part Avengers: Infinity War cost $1 billion to make, with $400 million just going to the screenwriters, directors, producers, and actors (and half the actor budget going to RDJ)?  As of now it’s a wild rumor, but it really wouldn’t surprise me all that much.  After all, when you look at the possible cast of the 2 movies, it’s pretty much every single character in the MCU, along with several that still haven’t been cast, and some of these will be in both movies.  And then when you factor in the sheer volume of special effects necessary to create Ant-Man and Wasp’s shrinking, Iron Man and War Machine’s suits, Thor’s lightning, Captain Marvel’s powers, Thanos’ person, Vision’s everything… that’s a lot of special effects, and it all needs to be absolutely perfect or you know the fans will get upset.  Toss in a few more millions for advertising and you can get up to a billion-dollar-budget pretty quickly.  Do you think the rumor is correct?

You know, I really wasn’t sure if I should dignify this rumor with a place on my “Weekly MCU Review,” but here it is:  there’s a rumor at NYCC that Marvel Studios may be removing The Inhumans from its release lineup over a “feud” with its TV division.  To me this just doesn’t make sense:  Marvel Studios stands to gain just as much from this movie as Marvel TV, and the Inhumans are proving to be a smash hit in the comics and on Agents of S.H.I.E.L.D., so I don’t see why Marvel Studios would want to cancel their movie.  Of course, I guess the silver lining might be that Marvel Studios will release the floodgates, allowing AoS and Marvel ABC to use the bigger Inhuman characters and show Attilan.  And regardless of whether or not The Inhumans gets made as a movie, the movies are going to have to acknowledge them sooner or later (probably sooner).  What do you think of this rumor?

So Marvel ABC is taking the Dubsmash War to a whole-new level:  Clark Gregg and Hayley Atwell will be appearing on Lip Sync Battle some time in 2016.  Will you watch?

This is kind of a no-brainer, but Clark Gregg thinks that Agents of S.H.I.E.L.D. will connect to Captain America: Civil War.  How do you think that connection will be made?

Wynn Everett was cast to play Madame Masque and Lotte Verbeek as Ana Jarvis (wife of Edwin) on Agent Carter season 2, in addition to a couple more casting announcements.  Madame Masque will be an actress and inventor.  What do you want to see in this season?

Here is the fourth teaser trailer for Jessica Jones, this time demonstrating her ability of flight… or at least jumping really high (but then again, Superman makes a major connection between those two concepts).  Either way would be pretty true to the source material; in the comics she can fly, but she never quite mastered it.  My guess is that they will use her flight pretty sparingly and explain that she’s not that great at it.  How much flying do you want to see her doing?  Personally, I’m just glad they’re going to have some flying!

And here is the fifth teaser trailer, highlighting the villain.  I love the voiceover and the purple lighting.  What do you think?

Here are teaser posters for Daredevil season 2 and Jessica Jones season 1 from NYCC: 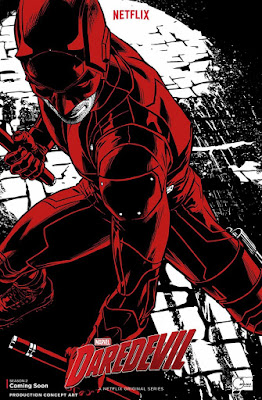 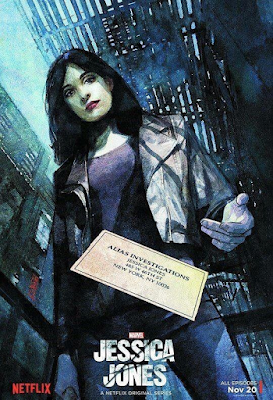 What do you think of them?

A new Star Wars: The Force Awakens trailer is rumored to be coming on October 19.  Excited to see it?