Team Compositions in the MCU

I read a quote from a comic book creator recently about the importance of not making a character too powerful:  the stronger the character is, the greater its weakness must be to compensate.  Think of it like an MMORPG (“Massively Multiplayer Online Role-Playing Game”):  certain types of players have certain stats elevated and other stats weakened.  In combat, no one character type is naturally stronger against all the others.  Here’s an example:

The game I know best is Runescape.  When I played there were three standard character types in terms of combat:  Warrior, Archer, and Mage.  The Warrior’s armor is naturally stronger against the Archer’s arrows but provides very little protection against magical attacks.  The Archer’s armor is naturally stronger against magic but weak against melee weapons, particularly blunt instruments.  The Mage can immobilize the Warrior, but the Archer’s arrows cut right through the Mage’s robes.  That is why smart players do not take on major threats by themselves; they join teams consisting of multiple players whose weaknesses are nullified by each other’s strengths.  No one character can do it all by himself.

This is a long way around to saying that when you look at the various teams in the MCU, you begin to recognize patterns.  Every team we have seen already or know we will see in the future has at least one character that fits most of the “character types” below.  Here are the types of characters I’ve identified, along with a brief description and list of MCU characters that fit the description on the teams we’ve met already or will meet soon.  In terms of teams, I will be using the original Avengers, the Agents of S.H.I.E.L.D. team from season 1, the Guardians of the Galaxy, and the Defenders (Daredevil, Jessica Jones, Luke Cage, and Iron Fist).

At the end I’m also going to talk about a prospective team for the “Secret Warriors” teased in the Agents of S.H.I.E.L.D. season finale as well as about the Avengers team following Avengers: Age of Ultron.  There will be a spoiler warning before the Age of Ultron discussion.  Don’t look if you haven’t seen the movie, because it may spoil the ending!

Leader – The guy who rallies the troops and keeps them in line.  Every team needs someone who will take charge, though occasionally different characters will lead.  Each team will also have a secondary leader who can help the leader and take over when necessary (like a Lieutenant).

Tank – The guy who takes the damage and keeps attention off the physically-weaker members of the team.  Often times the Tank can also deal massive amounts of damage while keeping the enemies focused on himself.  Generally they have some physical enhancement—increased durability, impenetrable skin, healing factor, etc.

Heavy Artillery – The guy with the big guns (often literally) that comes in to blow everything to hell when necessary.

Bruiser – The heavy hitter; generally someone who gets up close and personal with the bad guys.

Sniper – This guy strikes from a distance and provides reconnaissance information to the team.  Don’t underestimate how important a good sniper is:  A sniper can mean the difference between a successful mission and an ambush.  The best example in the MCU of a sniper at work is in The Avengers when Hawkeye is on top of a building letting the team know where the Chitauri are and how they can be defeated, and then giving Black Widow cover from Loki.  He shoots a few Chitauri down, but that’s not his primary job; his primary job is helping the rest of the team defeat them.

Aerial Support – The member(s) of the team who can fly.  Their job is to provide cover from the air and—when necessary—get everyone out of danger.  They may also provide aerial reconnaissance for the team.  Depending on the team’s mission parameters, having a pilot may suffice instead.

Pilot – The one who transports the team from one location to another.  This is different from the Aerial Support.  Depending on the team’s mission, they may not need a pilot—but most do.

Spy – The one who gets in close to gather information.  The Sniper, Aerial Support, and Spy all work together to make sure the team knows everything it needs to know before and during a mission.

Medic – The one responsible for patching the team up.  You definitely need one of these.

Technical Support – Every team needs someone to work the computers, design the gadgets, and keep everyone’s gear functioning smoothly.

All of these positions are necessary for the smooth functioning of any team—and knowing that can make it possible to predict where a team may feel the need to expand in the future.  For example, the Defenders are lacking in Heavy Artillery, Technical Support, and Sniping capabilities.  As such might Punisher be a future addition to the team?  The Guardians don’t have a Medic (unless one of them has that ability but didn’t show it in the movie).  Could the new Guardian for Guardians of the Galaxy 2 be a Medic (among other things)?  Let the speculation begin! 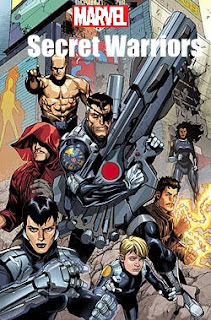 This can also help with projecting a possible lineup for the Secret Warriors in Agents of S.H.I.E.L.D., season 3.  Near the end of the episode, Coulson gave Skye a folder labeled “Caterpillar” and told her to put together a team of super-humans who can fight on behalf of S.H.I.E.L.D.  As of now, she is the only official member of the team, but I think we can guess at a couple more early members—Lincoln, Deathlok, and Alisha (the “Ginger Ninjas” chick).  The rest of the roster will probably be filled out with another Inhuman or two along with a couple of regular enhanced humans.  Thus far, here is how I would break that potential roster down into the categories I listed above:

The one missing at this point is the Aerial Support.  There are plenty of possibilities for adding someone who can fly:  an Inhuman with wings, a comic book character who can fly—Firebird?  That’s what I’m going to be looking for when Skye starts to build her Secret Warriors roster in season 3.

SPOILERS for Age of Ultron

We can also use this same process to analyze the new Avengers team following Avengers: Age of Ultron.  I really like this new team and hope we get to see it in action at some point; possibly even before Captain America: Civil War.  Don’t ask me how that would work (Agents of S.H.I.E.L.D., perhaps?), but I hope they will find a way.  In any event, this new Avengers team doesn’t have the same strengths as the “Avengers 1.0” team did.  Here is a comparison of the two teams:

The New Avengers team definitely has a few areas where it is better off than the first team—particularly in terms of Heavy Artillery, Bruisers, and Aerial Support (it doesn’t hurt that all but 2 members of the team have demonstrated the ability to fly!).  Their support staff dwarfs the support staff in the first movie.  However, there are a couple areas where the New Avengers are lacking—specifically Tank and Sniper.  I really think the New Avengers will miss Hulk and Hawkeye at some point, though I doubt that Hawkeye’s going to stay on the farm forever—he’s probably got a Bat Phone in case Cap needs him to come off the bench and put a bullet in Crossbones’ skull.

I hope that this article proves informative for you as you think through all of the different teams we have met and will meet in the future in the MCU (and in other media, as well; the same principles can apply to the Justice League, too).  I am very interested to see how this will affect the Avengers, S.H.I.E.L.D., and other teams we will meet in the future.  Which areas will they be lacking in?  Which will they have more of?  How will they evolve and improve?

What do you think?  Which of these is your favorite team?  Did I miss any categories you think need to be included?  Based on these 10 categories, what would be your ideal team of 4-10 characters?  You can use any of the characters we have met or are confirmed to meet in the MCU.